I learned long ago that I am in the business of touching people’s hearts. That is exactly what Swan Songs is offering these folks, their families,
and caretakers. 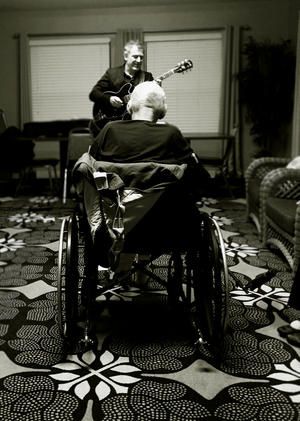 One of the more poignant aspects of my work is performing intimate concerts for some wonderful people who are near the end of their life's journey. I have an amazing organization, Swan Songs - Austin, to thank for these experiences, these exchanges of heart and soul between myself and those present.

It's a powerful moment to notice someone, like this 90+ year old gentleman who, as is often the case, was quite non-responsive at first. But soon he begin to tap his feet and his arms began to pump, grasping for the beat deep inside the music I was performing. In his case, as I was told, he was quite the dancer in his day and clearly he was ready for a bit more dancing. I'm certain it took every bit of energy his body could offer, but his spirit would not be denied. For 30 minutes we shared a bond that, as happens during each of these concert experiences, deeply embeds in my soul and reminds me of the gift I've been trusted with; the gift of song.

This concert happened on Friday evening. On Saturday, I was on the road to another gig in another city. By Sunday evening I'd returned home to find this photo in my inbox; an image which says so much about these Swan Song concert experiences. By the time I opened my email, this dancer had left his weary body, lifted to - what I imagine - would be a grand dance hall where he's cutting loose right this minute to an absolutely swinging band. You could say that I'm very thankful to have been that band's opening act, getting this gentleman's dancing feet warmed up, back here a little closer to home.

I approach each concert with the aim of providing some comfort, creating something uplifting in what is often a sad, emotionally difficult time for the patients, the families, even the caretakers at some of the hospice facilities. So, in that regard, it’s a very powerful reminder of what my role as an artist, a musician, is about at its deepest level. I learned long ago that I am in the business of touching people’s hearts, which is exactly what Swan Songs is offering these folks.

In our rapidly changing, growing city, the music community has had to re-assess, re-evaluate and fight the good fight to maintain a foothold as a valued asset to the heart, soul and cultural identity of Austin. Swan Songs founder, Christine Albert, and a host of wonderful volunteers, as well as all of the musicians associated with the organization, are a shining example of how music and the arts play an important “quality of life” role in all communities. It’s a component of my work, of my artistic life, that I truly value.